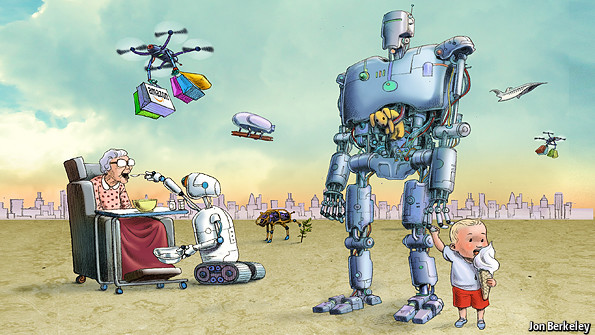 Behind Every Good Robot…….

Rise of the Robots!

Prepare for a robot invasion. It will change the way people think about technology

ROBOTS came into the world as a literary device whereby the writers and film-makers of the early 20th century could explore their hopes and fears about technology, as the era of the automobile, telephone and aeroplane picked up its reckless jazz-age speed. From Fritz Lang’s “Metropolis” and Isaac Asimov’s “I, Robot” to “WALL-E” and the “Terminator” films, and in countless iterations in between, they have succeeded admirably in their task.

Since moving from the page and screen to real life, robots have been a mild disappointment. They do some things that humans cannot do themselves, like exploring Mars, and a host of things people do not much want to do, like dealing with unexploded bombs or vacuuming floors (there are around 10m robot vacuum cleaners wandering the carpets of the world). And they are very useful in bits of manufacturing. But reliable robots—especially ones required to work beyond the safety cages of a factory floor—have proved hard to make, and robots are still pretty stupid. So although they fascinate people, they have not yet made much of a mark on the world.

That seems about to change. The exponential growth in the power of silicon chips, digital sensors and high-bandwidth communications improves robots just as it improves all sorts of other products.

And, as our special report this week explains, three other factors are at play.

One is that robotics R&D is getting easier.

New shared standards make good ideas easily portable from one robot platform to another. And accumulated know-how means that building such platforms is getting a lot cheaper. A robot like Rethink Robotics’s Baxter, with two arms and a remarkably easy, intuitive programming interface, would have been barely conceivable ten years ago. Now you can buy one for $25,000.

A second factor is investment. The biggest robot news of 2013 was that Google bought eight promising robot startups. Rich and well led (by Andy Rubin, who masterminded the Android operating system) and with access to world-beating expertise in cloud computing and artificial intelligence, both highly relevant, Google’s robot programme promises the possibility of something spectacular—though no one outside the company knows what that might be. Amazon, too, is betting on robots, both to automate its warehouses and, more speculatively, to make deliveries by drone. In South Korea and elsewhere companies are moving robot technology to new areas of manufacturing, and eyeing services. Venture capitalists see a much better chance of a profitable exit from a robotics startup than they used to.

The third factor is imagination.

In the past few years, clever companies have seen ways to make robots work as grips and gaffers on film sets (“Gravity” could not have been shot without robots moving the cameras and lights) and panel installers at solar-power plants. More people will grasp how a robotic attribute such as high precision or fast reactions or independent locomotion can be integrated into a profitable business; eventually some of them will build mass markets. Aerial robots—drones—may be in the vanguard here. They will let farmers tend their crops in new ways, give citizens, journalists and broadcasters new perspectives on events big and small, monitor traffic and fires, look for infrastructure in need of repair and much more besides.

As consumers and citizens, people will benefit greatly from the rise of the robots. Whether they will as workers is less clear, for the robots’ growing competence may make some human labour redundant. Aetheon’s Tugs, for instance, which take hospital trolleys where they are needed, are ready to take over much of the work that porters do today. Kiva’s warehouse robots make it possible for Amazon to send out more parcels with fewer workers. Driverless cars could displace the millions of people employed behind the wheel today. Just as employment in agriculture, which used to provide almost all the jobs in the pre-modern era, now accounts for only 2% of rich-world employment so jobs in today’s manufacturing and services industries may be forced to retreat before the march of the robots. Whether humanity will find new ways of using its labour, or the future will be given over to forced leisure, is a matter of much worried debate among economists. Either way, robots will probably get the credit or blame.

Robotic prowess will to some extent be taken for granted. It will be in the nature of cars to drive themselves, of floors to be clean and of supplies to move around hospitals and offices; the robotic underpinning of such things will be invisible. But robots will not just animate the inanimate environment. They will inhabit it alongside their masters, fulfilling all sorts of needs. Some, like Baxter, will help make and move things, some will provide care, some just comfort or companionship. A Japanese robot resembling a baby seal, which responds amiably to stroking and can distinguish voices, seems to help elderly patients with dementia.

The more visible robots are, the better they can help humanity discuss questions like those first posed in fiction. Is it necessary that wars always be fought by people who can feel pity and offer clemency, and yet who can also be cruel beyond all tactical requirements? (Already America is arguing about whether drone pilots deserve medals.

Does it matter if the last kindnesses a person feels are from a machine? What dignifies human endeavour if the labour of most, or all, humans becomes surplus to requirements?

People, companies and governments find it hard to discuss the ultimate goals of technological change in the abstract. The great insight of Asimov et al was that it is easier to ask such questions when the technology is personified: when you can look it in the face. Like spacefarers gazing back at the home planet, robots can serve not just as workers and partners, but as purveyors of new perspectives—not least when the people looking at them see the robots looking back, as they one day will, with something approaching understanding.