Does today’s patent regime operate in the name of progress, or instead, it sets innovation back? 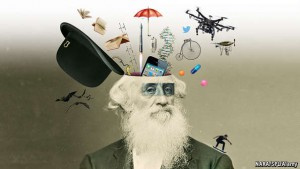 IN 1970 the United States recognised the potential of crop science by broadening the scope of patents in agriculture. Patents are supposed to reward inventiveness, so that should have galvanised progress. Yet, despite providing extra protection, that change and a further broadening of the regime in the 1980s led neither to more private research into wheat nor to an increase in yields. Overall, the productivity of American agriculture continued its gentle upward climb, much as it had before.

In other industries, too, stronger patent systems seem not to lead to more innovation (see article). That alone would be disappointing, but the evidence suggests something far worse.

Patents are supposed to spread knowledge, by obliging holders to lay out their innovation for all to see; they often fail, because patent-lawyers are masters of obfuscation. Instead, the system has created a parasitic ecology of trolls and defensive patent-holders, who aim to block innovation, or at least to stand in its way unless they can grab a share of the spoils. An early study found that newcomers to the semiconductor business had to buy licences from incumbents for as much as $200m. Patents should spur bursts of innovation; instead, they are used to lock in incumbents’ advantages.

The patent system is expensive. A decade-old study reckons that in 2005, without the temporary monopoly patents bestow, America might have saved three-quarters of its $210 billion bill for prescription drugs. The expense would be worth it if patents brought innovation and prosperity. They don’t.

Innovation fuels the abundance of modern life. From Google’s algorithms to a new treatment for cystic fibrosis, it underpins the knowledge in the “knowledge economy”. The cost of the innovation that never takes place because of the flawed patent system is incalculable. Patent protection is spreading, through deals such as the planned Trans-Pacific Partnership, which promises to cover one-third of world trade. The aim should be to fix the system, not make it more pervasive.

One radical answer would be to abolish patents altogether—indeed, in 19th-century Britain, that was this newspaper’s preference. But abolition flies in the face of the intuition that if you create a drug or invent a machine, you have a claim on your work just as you would if you had built a house. Should someone move into your living room uninvited, you would feel justifiably aggrieved. So do those who have their ideas stolen.

Yet no property rights are absolute. When the benefits are large enough, governments routinely override them—by seizing money through taxation, demolishing houses to make way for roads and controlling what you can do with your land. Striking the balance between the claim of the individual and the interests of society is hard. But with ideas, the argument that the government should force the owners of intellectual property to share is especially strong.

One reason is that sharing ideas will not cause as much harm to the property owner as sharing physical property does. Two farmers cannot harvest the same crops, but an imitator can reproduce an idea without depriving its owner of the original. The other reason is that sharing brings huge benefits to society. These spring partly from the wider use of the idea itself. If only a few can afford a treatment, the diseased will suffer, despite the trivially small cost of actually manufacturing the pills to cure them. Sharing also leads to extra innovation. Ideas overlap. Inventions depend on earlier creative advances. There would be no jazz without blues; no iPhone without touchscreens. The signs are that innovation today is less about entirely novel breakthroughs, and more about the clever combination and extension of existing ideas.

Governments have long recognised that these arguments justify limits on patents. Still, despite repeated attempts to reform it, the system fails. Can it be made to work better?

Reformers should be guided by an awareness of their own limitations. Because ideas are intangible and innovation is complex, Solomon himself would find it hard to adjudicate between competing claims. Under-resourced patent-officers will always struggle against well-heeled patent-lawyers. Over the years, the regime is likely to fall victim to lobbying and special pleading. Hence a clear, rough-and-ready patent system is better than an elegant but complex one. In government as in invention, simplicity is a strength.

One aim should be to rout the trolls and the blockers. Studies have found that 40-90% of patents are never exploited or licensed out by their owners. Patents should come with a blunt “use it or lose it” rule, so that they expire if the invention is not brought to market. Patents should also be easier to challenge without the expense of a full-blown court case. The burden of proof for overturning a patent in court should be lowered.

Patents should reward those who work hard on big, fresh ideas, rather than those who file the paperwork on a tiddler. The requirement for ideas to be “non-obvious” must be strengthened. Apple should not be granted patents on rectangular tablets with rounded corners; Twitter does not deserve a patent on its pull-to-refresh feed.

Patents also last too long. Protection for 20 years might make sense in the pharmaceutical industry, because to test a drug and bring it to market can take more than a decade. But in industries like information technology, the time from brain wave to production line, or line of code, is much shorter. When patents lag behind the pace of innovation, firms end up with monopolies on the building-blocks of an industry. Google, for instance, has a patent from 1998 on ranking websites in search results by the number of other sites linking to them. Here some additional complexity is inevitable: in fast-moving industries, governments should gradually reduce the length of patents. Even pharmaceutical firms could live with shorter patents if the regulatory regime allowed them to bring treatments to market sooner and for less upfront cost.

Today’s patent regime operates in the name of progress. Instead, it sets innovation back. Time to fix it.